Our offices will be closed on July 4.
You can still book online, make a payment, or contact us via our website. We'll be open again Tuesday. 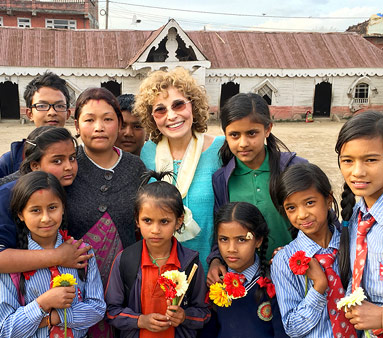 In 2015, two devastating earthquakes shook Nepal to its core, causing catastrophic damage throughout the country. One year later, Ilan and I visited Nepal to see how the country was recovering and rebuilding. While in Kathmandu, we discovered a truly inspiring school in the neighborhood of Joparti.

Uttam Sanjel established the Samata Shiksha Niketan School (“Promote Equity through Education”) in 2001 in an effort to provide equality in education and reduce the gap between the rich and the poor. In a country where the public educational system is deeply flawed and private education is impossibly expensive, his innovative school offers a high quality education to 1,200 children for about $1 a month. The children come from the working-class neighborhoods, with no distinction made based on origin, caste, or religion. They are taught lessons in science, math, history, and English, as well as more pragmatic life skills, and enjoy a nutritious hot meal and access to clean water.

Sanjel's so-called "Bamboo School" is named for the material from which all buildings are constructed: cheap and plentiful bamboo, which also happens to be particularly resilient to earthquakes. Following the success of the first school, Samata has since become the largest chain of private schools in Nepal with 38,000 students, 75% of them girls, in 19 districts across the country. In Kathmandu, undergraduate and postgraduate courses are also offered.

The school in Joparti is the first project to be funded under our new Friendly Planet Foundation. In 2016, we're donating 200 new student desks, to be used in new classrooms under construction. During our visit, we asked the children what they most wanted for their school, and the nearly unanimous reply was books and a library. So our next project is to create a library with English and Nepali books and a computer lab where the children can learn the skills needed to compete for jobs.

We're excited to support this lifechanging school in Kathmandu, and we look forward to doing the same for the other Bamboo Schools in the future!